Showing posts from May, 2012
Show all

Hindsight, Love's Timelessness, and the Will of God 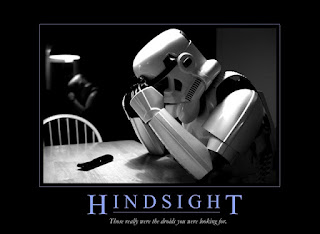 Malachi 3:1-7; 4:1-2, 5 I once had a lovely and very wise professor (the incomparable Ray Anderson) say in class, “You can only know God’s will in hindsight.”   He was speaking, of course, of that desire to figure it out right now , to deduce by prayer and spiritual guesswork what God wants you to do in a certain situation, so that you don’t make the “wrong” choice and screw up whatever it was God had planned for you.   But when he said it, “You can only know God’s will in hindsight”, I realized with a start that was quite true in my life.   How those Spanish language classes in high school and college that went nowhere were suddenly useful for the three months I spent in the Canary Islands,  how a painful falling out with a friend revealed dark and shameful things in myself and ultimately made me a better friend to another down the road.    How that experience I had in long-distance email conversation with someone my senior year of college le
2 comments
Read more

Prophetic humor, and being free as God is free 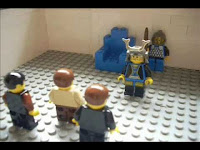 This week we read the story of Shardrach, Meshack and Abednego, and it was interpreted to us by our children through instruments, puppets, costumes, some great acting, and a life-sized statue of Justin Bieber (as the gold idol). (See  Photos of our day  with Shadrack, Meshack and Abednego). Daniel 3:1-30 It takes a certain gift, in the midst of a dark and terrible situation, to use humor to make a point.  It’s a particular way of remembering, or grieving, or stirring people to hope, Comedy is.  Up to this point we’ve seen prophets who have thundered criticism at the empire. Prophets who have embodied deep grief and sorrow. Prophets who could inspire to a distant hope in the future. But they have all been so serious .  And this is a serious story too, I mean, the men themselves were not laughing, and neither was Nebechenezzer.  But the telling of the story is that sharp, political humor that highlights the power as foolish and lifts up the powerless as hero. Comedy can
Post a Comment
Read more

Broken Down and Remade 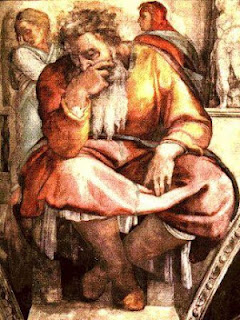 Jeremiah - by Michaelangelo This sermon continues our journey through the Old Testament prophets.  We had an artist in the center of our worship space, working with clay, creating, destroying, and recreating pots, throughout our worship service. Jeremiah 29:10-14 Jeremiah 18:1-11 It sucks to see what nobody else can see, and then have nobody listen when you try to tell them.  I have this reoccurring nightmare sometimes-  I keep trying to explain, I'm talking and begging and nobody is listening.  Nobody will believe me, (although in it I am often an adult arguing with my parents who think I am still a teenager, so it clearly has more to do with my own issues and unresolved frustration than anything in reality). But with this nightmare, I wake up and it’s over, thank God. But this was Jeremiah’s whole life .  Jeremiah was the son of the priest Hilkiah – the one who found the scrolls and brought them to King Josiah. His prophetic calling began around then and continu
Post a Comment
Read more

The matter of memory 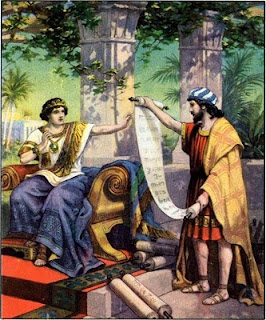 2 Kings 22:1-23:3 Deuteronomy 6:4-9 This weekend I traveled to Kansas City to see two of my sisters graduate – one from college and one from law school.  I stayed in the bedroom of my 8 year old nephew, Vincent, amongst legos and bugs pinned to velvet plaques, stars glued to the ceiling and collections of books about dogs.  After he’d oriented me to the important things in his room and left me alone, I realized there was music playing softly. It was a cd with the Sunday school songs I had grown up with: Jesus loves me, I’ve got the joy down in my heart, Jesus loves the little children, Oh, how I love Jesus, and others, on a mellow cd where they were paced, I discovered, to match the beating of a heart.  The cd was set on repeat. When he came back in I said, “Vincent, that music is so relaxing.” He said, “Yeah, I think so too.  I like to sleep with it on. Hey! maybe you could too!”  So when I went to bed that night I did not turn it off.  Throughout the night when I
Post a Comment
Read more
More posts