Showing posts from August, 2009
Show all

Why I am a Presbyterian

I did not grow up Presbyterian.  In fact, I have no recollection of ever having met a Presbyterian until I was in seminary, where there were so many of them I immediately vowed NOT to become one.  In my world people were either some form of Baptist (which is how we categorized ourselves), or they were Lutheran or Catholic – everyone else was considered non-Christian or miscellaneous, (which was a polite way to say "probably non-Christian"). ...... I grew up a Midwestern Suburban Megachurch Evangelical (see the blog, “ Stuff Christian Culture Likes ” for a more detailed, and shockingly accurate, description).  Our modest Christian Missionary Alliance congregation grew from 250 or so when I was in preschool to a whopping 8000 attendees by the time I graduated high school.  Church was about youth group, VBS, short term mission trips, bible studies, youth conferences and being a pastor’s kid in a place that went from two pastors to a dozen or so in my childhood.  “Wors
4 comments
Read more 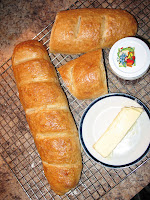 Sunday evening we gathered together to reflect on our first ever sabbath rest weekend. I was nervous as I drove to the church - our first Saturday service had been a bit rough and clumsy, and I didn't know how people would be feeling after the whole congregation skipped church on Sunday. I walked into the room and immediately sensed something in the atmosphere about the way people were engaged with each other. There was a tangible spirit of peaceful joy about the place. No exaggeration. People trickled in and added their pans and covered dishes to the bounty lined up on the counter, and joined the circle where others were already gathered talking with one another. We started sharing what our day had been like - everyone had felt strange about it. It was strange NOT to go to church.  For some it was more difficult than others.  But the other strange thing about the day was that it did not feel like other days, there was something different about THIS day. Then the stories start
Post a Comment
Read more

How I spent my first "Day of Rest"

- August 23, 2009
9:28 AM My "Day of Rest" began 2 hours and 43 minutes ago. There is still time to make it to a church service somewhere... in about 92 minutes I will be in the clear, out of the "hour of power," or whatever, where the possibility - however slim- remains that I might at any moment throw on appropriate clothes and shoes and dash away to some worship service to ease the itchy combo of Christian guilt, vocational habit and genuine longing. When I woke up, my 4 year old bouncing on me, I had the familiar searching feeling with adrenaline rush, What day is it? What do we have to do today? I was all ready to pull myself out of bed and launch into whatever demands the day would hold. And then it flooded over me like sweet warm chocolate sauce - Today we had...nothing. On purpose. For the whole day. The church where I am minister held our first bi-monthly Saturday evening worship service, intentionally creating this hole, this open space, for "sabbath rest."
2 comments
Read more