Showing posts from May, 2011
Show all

Hanging out where God is 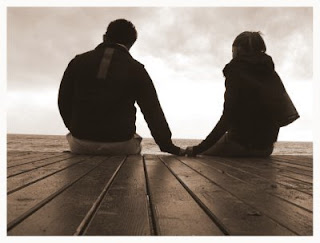 John 15:1-11 1 John 4:7-21 “I am the vine and you are the branches.” This passage from John 15 was read to me at my baptism.  I stood in a white robe, waist deep in water, in a pool at the front of the church building - a short, nervous 13 year old - and said into the mic that I loved Jesus and wanted to be baptized.   And my mother stood in the congregation, holding open the bible and read to me these verses as a charge. “Your life comes from Jesus, hang onto Jesus, abide in him and his joy will be in you.”  I can still hear her voice saying those words. Hang onto Jesus. That's a wonderful charge, and in the moment, standing there at my baptism, I was feeling that abiding like nobody's business.  I was hanging on to Jesus, and everyone could see that.  But when that moment fades, and real life creeps in, the question becomes, How do I do this? This intimidating thing of “hanging onto the vine”? How do I abide in Christ?  Is it about what I do? What I think, or believ
Post a Comment
Read more

A note to my congregation...

Yesterday, at the Presbytery of the Twin Cities Area meeting, the presbytery voted 206 to 56 to replace the wording of Amendment 10A in the Book of Order regarding ordination standards.   The change in wording was approved at the last General Assembly meeting, but required approval from a majority of of the 173 presbyteries in order to take effect.  Our presbytery was the 87th presbytery to vote for this change in wording, which means the change will go into effect July of this year.   The change in wording removes the wording "chastity in singleness and fidelity in marriage between a man and a woman" from our ordination standards - language that has been used to exclude those in same-gendered relationships from serving as deacons, elders and ministers of word and sacrament.  The new wording emphasizes the church's desire to "joyfully submit to the Lordship of Jesus Christ in all areas of life" and maintains that it is the job of the ordaining bodies - individua
Post a Comment
Read more 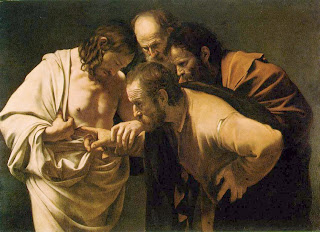 Caravaggio, "Doubting Thomas", 1603 Colossians 3:1-4 John 20:19-31 The other night we were sharing stories around the dinner table, and Andy shared with Maisy a story Owen has known but she had never heard before. It happened when Andy was six years old.  He was playing outside, and had been warned by his Mommy to stay away from the giant hole next door, where a foundation had been dug for a new house.  He could play anywhere else, but do NOT go near the hole.  Of course, he did, leaning over the edge just to peek, and his feet slipped on the gravel and he fell into the hole.  For what felt like hours he tried to get out, tried to climb, run, scramble, and found he was stuck.  From his spot in the bottom of the pit he could see that the sun was beginning to go down, and he knew he was supposed to be home by now. He began to get very afraid.  Finally, he stopped in the middle of the hole and he prayed. “Jesus, please get me out of this hole.” Then he ran t
Read more
More posts